When injuries have been sustained in a motorcycle accident.

I. NO “NO‑FAULT” COVERAGE FOR MOTORCYCLES: 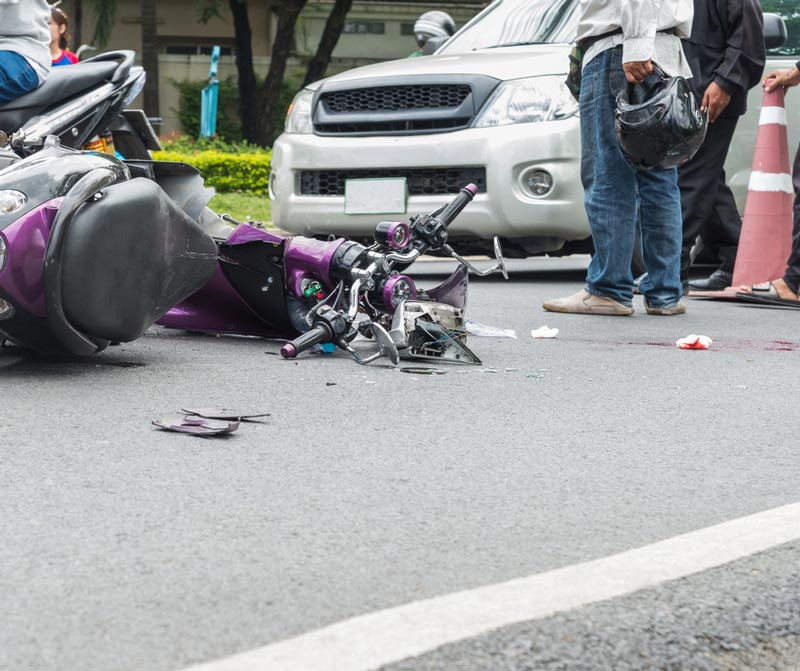 As discussed in the Motor Vehicle section, the No‑Fault law governs automobile related accidents. The No‑Fault law in summary provides coverage through the vehicle you occupied regardless of fault for necessary medical treatment and a portion of lost wages.

However, when operating a motorcycle there is no No‑Fault coverage. As a result there is no coverage through the insurance company for the motorcycle for payment of medical and lost earnings.

Medical and loss of earnings must be coverage through some secondary health coverage or disability policy if you have such coverage. If not outstanding medical bills or paid medical bills will be a direct part of the claim against the other party involved.

In a motorcycle accident, the only issue that may prevent a recovery is the issue of liability.

Even though the law does not require a serious injury in motorcycle accidents, the injuries are often most serious as a rider of a motorcycle is very much exposed.

In New York State the claim is asserted against the vehicles involved based upon degree of fault. New York State is a pure comparative negligence State. This means that the trier of fact (jury or judge) decides liability based upon relative degree. For example ‑ vehicle #1 may be held 25% and vehicle #2 75% or vehicle #1 maybe found 5% and vehicle #2 95% or vehicle #1 maybe found 100% and vehicle #2 0%. In other words, the total responsibility for the accident must add up to 100%. Under the rules of Joint and Several Liability, a passenger on a motorcycle may enter their entire judgment or any portion thereof against the owner and operator of any vehicle involved as long as the particular vehicle is found to be 1% or more at fault. This is often a very critical rule of law when a particular vehicle does not have sufficient insurance coverage to adequately cover the loss.

If you are involved in an accident in which a vehicle involved is uninsured, the bodily injury portion of the claim can be recovered by asserting an Uninsured Motorist Claim. This claim would be asserted against the carrier that insured the motorcycle.

If a passenger on a motorcycle and the motorcycle is uninsured, and if there is no household vehicle, then a claim can be made against the Motor Vehicle Accident Indemnification Corporation ‑ an insurance industry safety net.

An Uninsured Motorist Claim also exists in a “hit and run” type of motor vehicle accident ‑ where there has been physical contact with the offending vehicle, and in which the offending vehicle leaves the scene of the accident and could not be identified. In such a circumstance, the incident must be reported to the police within 24 hours.

In an Uninsured Motorist Claim, the carrier essentially “steps into the shoes” of the uninsured vehicle (or in a “hit and run” ‑ the vehicle that fled the scene) and as a consequence gets the benefit of all the same defenses that the offending vehicle would have, namely potential liability apportionment.

The last point of significance of an Uninsured Motorist Claim, is that it being a function of a mandatory policy provision, the claim proceeds to arbitration rather than trial.

Many times were the injuries are serious, one of the biggest issues in the case is identifying coverage. This passage is just a short introduction to this type of coverage, and should never be construed to obviate the need to seek direct legal advice.

If there is a claim for property damage to the motorcycle, this can be covered in one of two potential ways.

The first is when one carries collision coverage. This is a first party insurance provision that provides coverage for the damage to the motorcycle regardless of who is at fault. This is also commonly known as a full coverage policy. This is collected through the insurance company that insured the motorcycle which was damaged. They will pay the cost of repair or the value of the motorcycle as it was immediately before the loss, which ever is less. The amount paid is further reduced by the amount of the premium on the policy.

The property damage claim should also cover the costs of removal, storage and a rental vehicle up until the time that the carrier has the vehicle assessed. After the claim is reported, the carrier will generally send an adjuster to inspect the motorcycle.

Often the carrier for the other party does not willingly concede their fair share of responsibility. In the case where they do not, a claim can be added to the personal injury claim as a second cause of action, or pursued separately.

THE ABOVE PASSAGE IS NOT INTENDED TO ACT AS A SUBSTITUTE FOR LEGAL ADVISE, BUT RATHER TO PROVIDE SOME BACKGROUND OF THE COMMON ISSUES OF THIS CATEGORY OF A CLAIM. PLEASE CONTACT OUR OFFICE EITHER BY PHONE OR E‑MAIL TO OBTAIN THE LEGAL ADVICE THAT YOU ARE ENTITLED TO. THERE IS NO FEE FOR A CONSULTATION AND OUR OFFICE ONLY OBTAINS A LEGAL FEE CONTINGENT UPON RECOVERY.

WHAT IS MY MOTORCCYCLE ACCIDENT CASE WORTH?

Contact the LAW OFFICE OF JOEL J. TURNEY, LLC today and find out what your case is worth.

“Please pass on the sincerest gratitude to the people on your team.”

"I will gladly and with the utmost pride certainly refer matters your way should I hear of any."

"You resolved a long lingering troublesome matter - when other attorneys were unsuccessful."

"I appreciate the integrity and diligence of your work on my behalf."

"Thank you for handling this matter so thoroughly for me."

"Thank you ever so much for taking on my case. Without your help I would have ended up with nothing."

"I will highly recommend you to anyone who needs a personal injury attorney."

"So appreciative of your professionalism and your expertise."

Client services and results are our first and only objectives. We represent clients who have sustained personal injuries as a result of the negligence of others. Our office handles cases pending in the five boroughs of the City of New York, Long Island and throughout the State of New York.

All consultations are without charge. The legal fee (standard one-third) is contingent upon recovery. The firm pays expenses in the prosecution of the action.

The information on this website is for general information purposes only. Nothing on this site should be taken as legal advice for any individual case or situation. This information is not intended to create, and receipt or viewing does not constitute, an attorney-client relationship.